Kuk Sool is a complete system, intended not only for self defense and health, but for the development and cultivation of the entire individual.

Its focus for attaining this is on the concept of balance -- equilibrium in mental, physical and spiritual traits. This same concept is present in the ancient "Taegeukgi" symbol seen on the South Korean flag, which represents yin, yang, and the four elements of nature in balance. While Kuk Sool is comprised of many forms of training, such as meditation, philosophy and healing arts, which have the purpose of the rounding out of the person, even those aspects of practice which specifically deal with physical training are aimed with this concept of balance in mind. 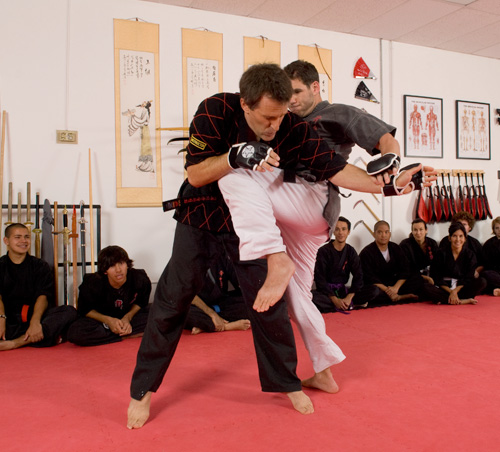 Within the world of martial arts, different fighting systems are classified by the nature of their movements and their approach to training. Arts which heavily train the strength, endurance, and athleticism of the body in order to generate and deliver powerful strikes and blows are considered "hard" martial arts, and include such arts, for example, as karate, taekwondo, muay thai, and Shaolin kung fu. Arts which rely on the technique of using an opponent's strength against him with circular movements and redirection are considered "soft" martial arts, and include arts such as jujutsu, aikido, and tai chi.

Kuk Sool's fighting system is composed of both "soft" and "hard" training. Kicking, hand striking with punching and trapping, grappling, and groundfighting are all part of the Kuk Sool regimen. Rather than relying on hard blocking movements, it uses circular "netting" movements which redirect an opponent's strikes, often throwing him off balance, after which it will capitalize on his disadvantageous position to either strike, throw or grapple him. This makes for a self defense system where one is not only relying on a single, lucky, powerful strike, nor strictly on securing a takedown before one is struck himself -- rather, it avoids the whole issue of "attrition" by constantly maneuvering to a position where the opponent cannot strike or grapple. This approach allows a Kuk Sool practitioner to constantly stay in control, not merely trading and "absorbing" blows. It also allows him to prevent being grappled if he needs to be mindful of multiple opponents, and was created for bodyguards with this in mind.